For access to solutions based on EPVH technology, please visit

The EPVH library and binaries are no longer distributed through this webpage, but the documentation page is kept for reference about EPVH technology.

EPVH is a visual hull reconstruction tool, to build 3D models of objects from their silhouettes as obtained by a set of calibrated cameras. A binary executable is provided for Linux, Mac and Windows systems. The tool is accessible from the command line (reconstruct executable) or as a simple C++ API to be included in your programs (linux-only). It builds a polyhedron mesh representation of a scene, the silhouette images and calibrated view information of which you provide. It is based on research code developed during my PhD, and is based on the method presented in the following research papers: Efficient Polyhedral Modeling from Silhouette. EPVH is provided as-is, with no warranty, and is free for non-commercial use. It is subject to a free-software License. EPVH has minor system requirements. Please let me know if this program is useful to you. If so, please cite my work/link to my web page.

The input for the executable "reconstruct" is a calibration file with N 3x4 calibration matrices, and N greyscale image files containing the silhouette mask, in P5 raw PGM format (0 = background, non-zero = foreground). Silhouette contour polygons can also be used as input on the command line (see command line help for details). An example dataset with 12 views is provided in the Example directory of the distribution.
The output is either an OFF model file with triangles (geomview readable, very simple to input), or a PMESH description (a home-breed OFF extension described here). The program decides which format to generate according to the extension of the provided output file (.off -> OFF, .pmesh -> PMESH). Further instructions can be obtained by typing "reconstruct" with no arguments on the command line.

A small API and default command-line front-end source is provided as a means to link your program against EPVH in linux. The source for the front-end (see file src/reconstruct.cpp in the archive), as well as the .pro and qmake-generated makefiles are provided as examples on how to use the linux shared library libepvh in your code. After checking the requirements for EPVH, you can compile the project by typing in a shell "qmake project.pro" while in the main directory of the archive, then "make".
You can use src/reconstruct.cpp as a basis to build your own program. Data structures are straightforward and explained in the provided headers (particularly include/epvh.h). Here is a short introduction to these classes, in include/epvh.h:


EPVH::Mesh is a triangular mesh description of the visual hull polyhedron. Two STL vectors are used to store vertex coordinates, and triangles (described by 3 indices in the vertex array). This internal structure is straightforwardly used by the reconstruct program to generate the OFF triangle mesh. As such, an example of usage of the EPVH::Mesh class is given in the dumpOff function of the main source file src/reconstruct.cpp.

EPVH::PMesh is a polygonal mesh description of the visual hull polyhedron. Three STL vectors are used to store vertex coordinates, contour headers, and contour index tables. This internal structure is straightforwardly used by the reconstruct program to generate the description file. As such, an example of usage of the EPVH::PMesh class is given in the dumpPMesh function of the main source file src/reconstruct.cpp.


When no geometry is reconstructed, the problem is very likely to come from the calibration matrices.
Check your coordinate systems: the chosen convention is the same as in the vision textbooks (see for example)

Possible errors include:
- non direct basis chosen for the world or camera coordinates system
- erroneously shuffled order of view matrices and their respective images
- wrong camera basis chosen: x and y base vectors must be oriented in raster order (x pointing right, y pointing down, z toward the scene)
For example if the camera z points outwards (with respect to the scene) it won't work.

File format enhancements. Introduction of PMESH, and additional OFF fields.


If you encounter problems, feel free to contact me. 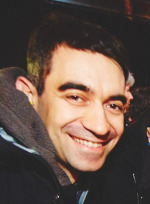